U.S. Gets A Taste Of Life Without Immigrants In Nationwide Protests

Businesses ground to a halt across the country as marchers and strikers opposed Trump’s crackdown.

AUSTIN ― Immigrants across the country stayed away from work, missed school or avoided making purchases on Thursday in support of a grassroots movement aiming to show the country what “a day without immigrants” looks like.
In an effort to combat President Donald Trump’s immigration crackdown, restaurants and other businesses closed their doors in Chicago, Austin, San Francisco, Detroit, New York City, Washington D.C., Charlotte and other cities ― either in support of the immigrant community or because too few employees turned up to work.
The Huffington Post has withheld the names of several of those who spoke to us on Thursday to protect them from potential reprisals by immigration authorities.
In Austin, hundreds rallied outside City Hall, letting out cheers as passing cars honked in support. Noemí, 17, waved an American flag with her sister in front of the building. Both are American citizens but worry for their undocumented parents.
“I’m here for my family,” Noemí, who missed a day of school to attend the rally, told The Huffington Post. “My parents came to this country 23 years ago. They’ve made their lives here. …We want to make the city a better place to live. This city would fall apart without immigrants.”
Noemí’s mother takes care of her three daughters at home while her husband works in construction. She said that for the first time in her life, she’s scared to leave the house, after a string of immigration arrests that resulted in many people with clean criminal records being detained. In recent years, the Obama administration focused deportation proceedings primarily on people who committed serious crimes or recent crossers, while largely sparing people with clean records and longstanding ties to the country.
“I used to feel secure that my husband would come home after work, like he always has,” Noemí’s mother said. “Now we don’t know.”
Read More >
Recent Posts
About 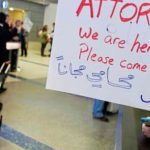 USA Today: What to do if immigration officers come knocking at your doorImmigration, Special Topics