Recently on a flight from Salt Lake City to San Antonio I found myself sitting next to a man for the two and a half hour journey. I learned very soon after we began to talk even before the plane left the airport, that he is a lieutenant-colonel in the United States Army and was attending a military conference in San Antonio. He was a 25 year veteran who had led troops in both Iraq and Afghanistan as well as continues to teach courses on military history. He knew his stuff.

Knowing little of the history of the various military branches, but having some knowledge through my own teaching, of mythology and culture, I asked him, after offering a few characteristics of what a myth is, if each of the branches of the military grew out of and sustain their own unique mythologies. I suggested that far from being “lies,” myths carry the deepest values an individual or an entire people, hold and promote; it is what shapes us as the individuals we are. With that thumbnail idea in mind, we proceeded to have a conversation about the mythologies of the military that lasted until we landed some three hours later. We continue to this day to keep in touch.

I use this very rich experience to introduce a new book I have been reading: Reclaiming Conversation: The Power of Talk in a Digital Age by Sherry Turkle (2016). Her research and discoveries are astonishing but in many cases not surprising. Working with young people in schools, she has measured how texting, emails, and other technological means of communication have lowered the level of empathy one feels for another and others. The smart phone, she believes, has altered not only behavior with one another, but the prospect of intimacy itself. Smart phones sit at the dinner table and restaurants like an additional guest, face- up, ready to be pounced on when it rings or buzzes; fear of boredom is the major player among 18-24 year olds, Turkle has discovered, so the computer or cell phone is the instant escape from solitude, being alone or feeling bored, isolated, left out. It is also the default corridor to escape conversation.

Her research shows that the technology we lionize is also the technology that can silence us, especially in shutting down conversation, either on the phone or face-to-face. Her subjects tell her that they would rather text someone than talk to the person directly. Fear of not getting it right is the main reason presented for not wanting to have a conversation with another: one might say something and get it wrong. There is no time to edit, to control the communication. She uses the image that far from conversing more, we connect more; connection overrides conversing; consequently, we can find ourselves in a “technological cockpit,” isolated from any ideas, notions, feelings or beliefs that do not agree with our own. Conversation, real conversing, throws one into ambiguity, into a place where ideas take on their own life, and are not so controllable and sometimes not so agreeable. But the trade off can also lead to new insights and realizations not considered before.

She insists that there is hope in retrieving conversation, which is directly linked to civilization. Civilization brings up its beginning word, civility. Bullying, Turkle suggests, especially on-line bullying, may be experiencing such an acceleration because one does not see the other person’s reactions, his/her feelings, or the trauma incited, when bullying uses technology. Empathy is erased or sharply curtailed by technology because the other person is not present in an embodied way as an individual.

Conversation moves in another direction: it promotes intimacy and uncertainty; in conversation one is not fighting to be right or to win, but to understand the point of view of another and one’s own, more fully. “Face-to-face conversation unfolds slowly. It teaches patience. We attend to tone and nuance. When we communicate on our digital devices, we learn different habits…. We dumb down our communications, even on the most important matters. And we become accustomed to a life of constant interruption” (p. 35) that allow only the briefest of sound-bytes. Conversation needs duration and durability. Real conversation, not passing information back and forth, can serve as “a crucible for discovery” (p. 37). Ideas “come from speaking.” What matters most in conversation is risky. “The thrill of “risky talk” comes from being in the presence of and in close connection to your listener.” One gives up control and allows ideas to have their own way, to see where they lead, what connections might be stirred in the crucible of time and duration, not in the pauses between constant interruption.

Turkle’s research reveals that the average adult checks his/her phone every 6.5 minutes; teenagers send an average of 100 texts per day. 80% sleep with their phones and will check them when they roll over during a night’s sleep; 44% never unplug from their devices” (p. 42). The behavior is both compulsive and addictive. Instead of spurning interruptions, we then tend to welcome them to keep the wolf of boredom at bay. Stillness is eliminated; solitude turns to loneliness and terrifies; we multi-task and concentrate on something for only a few minutes or even seconds. Our lives can easily become scattered and so full of busyness that at the end of the day we are left with little to reflect on; in fact, reflection seems a lost art, first cousin to conversation. The end result is a shallow and incomplete sense of who we even are as a person.
Perhaps more than a little of the brutality we see today in human interactions is a direct mirroring of how technology is insisting and training us to relate to one another.
Nonetheless, Turkle remains hopeful; she believes we can reclaim conversation, and with it an earlier form of intimacy, community and basic human respect for one another’s point of view without necessarily acquiescing to it. Listening is often enough, wherein the other feels heard. Shrill attacks on what another thinks or believes reduces our humanness and with it, civilization itself is dealt a wounding blow.

My knowledge of the origins of various branches of the military is so much richer from my plane partner’s knowledge, shared in conversation. His knowledge of what comprises a myth, both personal, national, and now global, was also enhanced, I like to think.
True conversation is one of those rare win-win human delights. Not winners and losers. 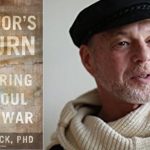