Norland Téllez is a writer/thinker and visual artist with a background in film animation. His core artistic and intellectual life centers on the study of the Popol-Wuh, the K’iche’ Maya epic of creation.

A sacred book, the Popol-Wuh or “Book of the Counsel” is a consummate work of the epic imagination and has been lauded by scholars as “the Book of the Fourth World.” The Popol-Wuh indeed constitutes the pre-Columbian or pan-American Bible par excellence. It may seem odd that a work of such transcendent significance remains relatively unknown to the general public, even in the field of myth studies. For this reason I have made it my lifelong task to introduce the Popol-Wuh to the collective consciousness of our time and the depth-psychological study of myth.

My work on the Popol-Wuh proceeds in two fundamental directions, two roads that cross each other and share the same source. In one direction, my work leads to the visual development and re-translation of the K’iche’ epic of the Popol-Wuh as Wisdom of the Peoples. This is the work of re-envisioning the K’iche’text, which aims by its very nature at a “popular” audience of all ages, from young to old. On the other side of this mythic coin, however, I develop a more explicit conceptual understanding of the Popol-Wuh and its deeper symbolism, which led me to transform the vessel of depth psychology into what I called a “depth-mythological” study of the Esoteric Dimensions of the Popol-Wuh, a theoretical dissertation aimed at a more select audience of artists, scholars, and philosophers or lovers of myth. 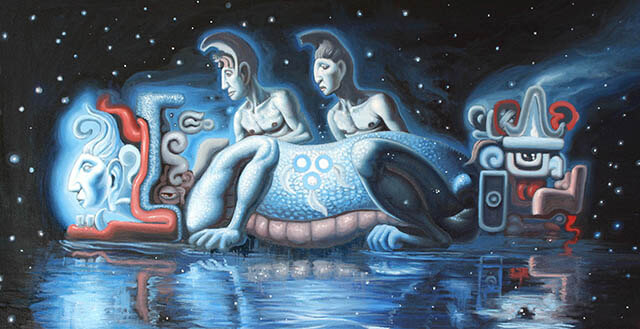 Although it may be a cliché to say that the Book found me, it is true that I did not strictly choose the Popol-Wuh as the primary focus of my career. On the contrary, the Book even forced me to expand the scope of my career and take up a full conceptual study of the Sacred Book of the Fourth World.

Over twenty years ago, the Popol-Wuh came to me as a gift from my father after one of his travels to our native land Nicaragüa. He innocently threw the little book upon the table and said to me “Creo que te va a gustar” ‘I think you’ll like this.’ Little did I know that over two decades later I would still be in the midst of its development and far from finished with it. As my lifework, in principle this work can never be done as long as I’m still here living and breathing.

Not long before the Popol-Wuh text came into my hands I was already dreaming of it. As soon as I left my fourth year of study at CalArts, I began to be invaded by dreams and visions whose great significance I failed to understand. When I first read the Popol-Wuh, it was of the nature of revelation, with every turn of the page I seemed to make sense of a fragmentary world of dream and vision. The Popol-Wuh seemed to provide an archetypal thread or bloodline to my deeper historicity as a Central American, one that defied the very notion of identity and being.

It is a curious fact that the K’iche’ epic opens with a line about the hidden identity that qualifies the true reader of the Popol-Wuh: “the one who can think it and interpret it,” as someone who necessarily “bears the face of one who carries its secret identity.”

The famed “Book of the Counsel” thus offered a kind of connecting tissue for all the disparate psychic material that had irrupted into my unconscious; it gave it a certain order of collective significance. The “healing” effect—although well within the scope of the archetype of the “wounded healer”— did not come from reducing the Popol-Wuh to the order of my personal existence; on the contrary, it came out of translating my personal life into the symbolic order of universal history, coming out the impersonal or archetypal dimensions those images opened up. This is why I hesitate to call the Popol-Wuh my “personal mythology,” not only because of its obvious derivation from the K’iche’-Maya people, but also because of the Popol-Wuh’s own appeal to archetypal universality as the Wisdom of the Peoples. 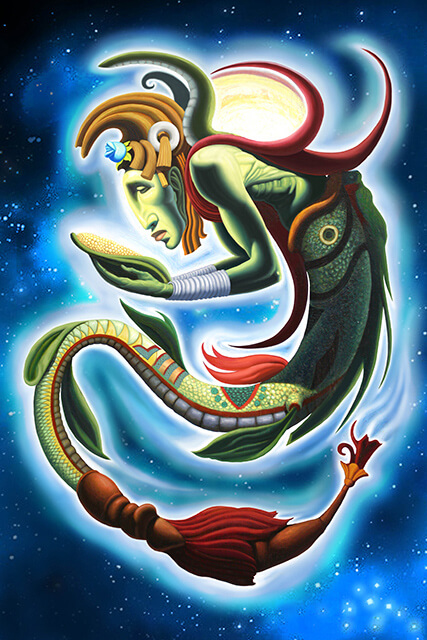 Of course, the financial aspect of the enterprise is never without its challenges. The publishing business is a rapidly changing field and as it continues to transform in ways that potentially benefit authors and the unprecedented possibilities of self-publishing. The impact of communication technologies continues to play a decisive role in reshaping the publishing industry, having taken all content and form online, into the virtual spaces of our lives. We are fortunate to live in these best and worst of times, where new possibilities are opening up that were unimaginable in former times.

I mentioned the way in which the Popol-Wuh came into my hands, in archetypal fashion, from the hand of my father, a figure who symbolizes the spiritual legacy of my people. At the same time, this defining moment of my life, which steered me to the Popol-Wuh, also has a feminine source. My mother and grandmother have both given me their god-suffering strength and patience as well as the visionary intuition needed to carry this vision quest with the Popol-Wuh into the light of being.

Included in this feminine source is also a significantly decisive and literal gift that came from my wife: The Secret Language of Symbols, a book by David Fontana, which served as my first introduction to Jung’s thought and the exploration of the unconscious. This little tome by a relatively unknown author was the little bait that led me into an epic in-depth study of Jung’s collected works as a whole, an intellectual and artistic pursuit that went on for almost a decade before enrolling into Pacifica’s Mythological Studies program.

There is no question that realizing the complete translation of the Popol-Wuh is at the center of everything I do and continue to do on the front of its upcoming publication; all my artistic and philosophic energy is going into the preliminaries of securing funding to finish my work. Looking towards the Dawn of the Popol-Wuh in our collective consciousness, my pursuit ultimately leads me in the direction of epic filmmaking. I always imagined that Guillermo del Toro would be one who could help bring the Popol-Wuh to this level of dissemination, reaching the widest possible audience, and letting the K’iche’ epic shine where it belongs: alongside the Bible and the Lord of the Rings Trilogy. 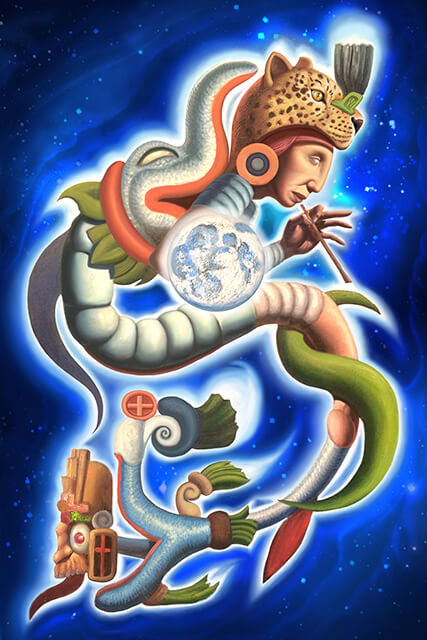 Of course, with all these artistic and intellectual demands on my life, it is easy to succumb to stress, sometimes nearing the black pit of despair. But I do have a lovely family which keeps my feet firmly planted on earth, even if my head likes to fly into the nether regions of the cosmos now and then. Being proud owners of a small family of chickens, not to mention our little dog and cat, also play their role on the ground of my personal existence. And finally, I would have to mention tennis, which plays a crucial role in my family, as providing a unique physical and mental counterbalance to all my creative and artistic endeavors. I find tennis to be a highly meditative game which embodies, much like art, a kind of philosophical mindset to sharpen the meaning of every stroke from the ground zero of love.

About Pacifica and You

Once I became interested in Jung and in the esoteric dimensions of the Popol-Wuh, I got to know the work of Raphael Girard, also Swiss, who saw in the K’iche’ text a “Fountain of History” and a source of pre-Columbian spirituality with a striking gnostic character. The experience of reading Girard’s book on­­ The Esotericism of the Popol-Vuh in the light of analytical psychology led me to enroll in Pacifica’s Mythological Studies program, where I ended up writing the Esoteric Dimensions of the Popol-Wuh as a kind of lunar complement to Girard’s solar volume. I went to Pacifica to concentrate on this mythic side of the Popol-Wuh in order to re-envision it, as Joseph Campbell would have it, in terms of being a “picture language of metaphysics.”

The degree serves to validate my claim on the Popol-Wuh as being more than a personal idiosyncratic toy or aesthetic fantasy. My degree serves as the necessary background to undertake my own translation of the K’iche’ manuscript in the light of the current sum of scholarly and philosophic knowledge, particularly in the context of the epic imagination and its mythic historicity.

On a personal level, studying the Popol-Wuh provides its own reward: being in the position to translate the philosophic vision of the indigenous text is a huge privilege that I could not have dreamed in my younger days.

Finally, I would like to leave you with an excerpt of my translation of the preamble to the Popol-Wuh (¶9-11):

“This is why we call it the Popol-Wuh or Book of the Counsel: because it is the great instrument of vision for the Dawn of Life, as it is told.”

“Thus the ancient scriptures did exist in ancient times—as painted codices and chiseled stone—but today their faces are hidden from those who look but cannot see, turned into a mystery for those who think but cannot know.”

“So the true reader of the Popol-Wuh, the one who can think it and interpret it, bears the face of one who carries its secret identity.” 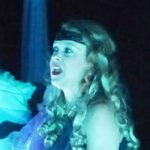 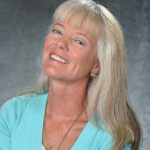