Tell us about your work –

I have made my living as a writer and editor for over 35 years. For most of that time I worked in health care and the sciences, but after earning my doctorate, I’ve been writing from the standpoint of a cultural mythologist.

How/why did you get into this line of work?

As James Hillman talks about in “The Soul’s Code,” I always had a strong sense of my daimon; by 10 years old I knew I was meant to be a writer. I submitted to school literary magazines from junior high on; when I was 25 I wrote an article about kids with ADHD that got published in a local medical journal, and soon after got my first paying writing job researching and writing the medical portions of a book about healthy aging for seniors, after which my feet were firmly set on the path of medical and scientific writing. That paid the bills, but until I went to Pacifica I was basically writing what other people wanted me to write; now, I mostly write about what I am interested in, which is the power of story and myth and archetypes in our lives.

When I wrote health care information, my goal was always to help people understand and take care of their health. But because I was anonymous in most of the work I did, I never knew if I really helped. That’s changed. At the launch event for “Jane Eyre’s Sisters,” a woman came up to me and with tears in her eyes said “I am 71 years old and for the first time, thanks to your book, I know what it is I have been trying to do with my life.” Recently I heard a story about another woman who sat and wept as she read my book, because all her life she’d been told she was selfish to try to live her own life, and my book made her feel for the first time that she was doing the right thing. To know that my words have helped someone in that way is the best feeling.

For me it’s been finding the time to do my own writing while still making a living. I find when I write for others, especially if I do it full-time, it’s hard to have the energy to write my own stuff. So it’s been a trade-off between making money vs. putting time into my own work.

Yes, a beautiful example of synchronicity. Ten years ago now I met Richard Smoley, who has written several books on Western gnosticism that I have read. In the course of our conversation about his work, I happened to mention that I had an idea for a book. I’ve since found out through personal experience that lots of people say that to published authors, but Richard was gracious and asked me to tell him my idea. I did, he reached into his pocket and brought out a card, and said “I’m also the Acquisitions Editor for Quest Books, and we would be very interested in such a book if you write it.” I took that as a sign! I quit my job and spent the next year on the first draft. But I bogged down, and that’s when I decided to go to Pacifica (see below).

I do keep hoping that someone like Oprah or Elizabeth Gilbert or Emma Watson will “discover” my book. Not just because of sales, but because I truly feel that the message of my book, that women (and men) have been writing a consistent story for centuries, completely unlike the Hero Quest story, one that scholars have ignored but that has a lot of wisdom for us all, is important. The surprising thing is that I’ve found I have a knack for public speaking, and I’m getting more and more invitations to do that. I recently spoke to the state convention of the American Association of University Women and then traveled to Sun Valley in Idaho to speak to the Joseph Campbell Foundation there, plus I’m now on what some call the “Unitarian circuit,” doing talks at Unitarian and other liberal churches all around the Puget Sound region. So I would like to be able to report in a year that I’ve been invited to speak at some major conventions and that the book is a bestseller!

And also, I’d love to be able to say that I’ve done or will soon be doing a three-day workshop at Pacifica on the heroine journey as something entirely different from the Hero Quest story instead of a female variation on it, with people like April Heaslip and Cary Gardell and Elizabeth Kingswood who are breaking new ground with their dissertations on this topic.

Years ago, my Jungian therapist (another Pacifica grad) taught me how to invite the muse and when to say “thanks, I’m done for today.” So I get up, have my Earl Grey tea, do a bit of dream journaling, then breakfast, and then it’s my writing time. Sometimes I go out to a cafe to write; I get more done in that kind of setting than at home where one is always thinking “oh, I really should do . . .” some chore or errand. I write for two or three hours and that’s it. Maybe I’ll only get one page, but a page a day, that’s a book in a year. Then I have lunch and focus on work for clients. Usually I take a long walk somewhere in the late afternoon. On weekends I try to get out in nature, either for a hike or a cross-country ski or snowshoe trek. I also feed my right brain through embroidery or beadwork, and I like to listen to Tom Kenyon for meditation. Evenings I kick back and watch TV or read; I blog about television and movies so I try to keep up with the latest in the culture. As much as I can, I avoid the news!

As I said above, I got stuck on my book at one point. I knew about Pacifica; in fact, in 2005 I attended the one-day introduction. But at that point I couldn’t justify spending the time and money to pursue a PhD in Myth. Around the time I got stuck on the book, I also filled out Quest’s Author Questionnaire, the book proposal. There’s a section that asks ‘who are you to be writing this book?’ And I had nothing beyond ‘um, I’m the person who had the idea?’ I figured that if I got a doctorate, I could write my dissertation on the book topic, and then I could present myself as an authority.

But that’s the excuse I gave myself. Really it was the program itself that attracted me. I’ve always been interested in world religions and mythology, I’ve had a strong interest in depth psychology since college, and I’m a huge reader, so all three aspects of the Myth program appealed to me. I thought it would be fun, and it was. At my interview Laura Grillo warned me that there would be a lot of reading and a lot of writing, and I replied “that’s like telling me I will have to eat ice cream and put hot fudge sauce on it.”

Identifying myself as a cultural mythologist makes people sit up and take notice; I find that people are very interested in a mythological and archetypal slant on what goes on in society and respond well to what I write or say. And of course it gave me the knowledge and authority to write my book, which is based on my dissertation but moves far beyond it. I’m now at work at a follow-up book; not one I planned on, but that has emerged as I talk about the differences between a “heroic” approach to life and the transformative path of the heroine story.

I also started teaching in a local extension program; so far I’ve taught about archetypes and myths in film, which was a hugely successful class and they keep asking me to do it again; the writings of James Hillman; Rick Tarnas’s “Cosmos and Psyche”; and most recently an introductory class on Dante’s “Divine Comedy” which was also a big hit with the adult learners in the community. Quite a few are clamoring for me to offer a more in-depth class where we can do a close read of the work, so that will probably happen soon.

I like to say that I have a doctorate in soul and the shadow. I’ve always done dreamwork—I was an Ira Progoff disciple in college, and when I got my first master’s degree I did a thesis on the use of dreams in healing throughout history—but Pacifica honed my ability to clue into what my psyche wants me to know, to see shadow at work, and to be aware of synchronicities. All of which has been most beneficial to me personally.

Also, after a lifetime of thinking of myself as a writer, for the first time when people ask me what I do, I answer with no qualifications. No “I do medical writing and editing” or “I’m a writer and an editor”—I say “I’m a writer.” It’s a subtle but deep shift in how I think of myself, and I’ve noticed a subtle shift in how people respond to me.

“the way we imagine our lives is the way we will go on living our lives.” 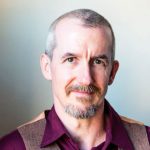