The Firestones have had three generations of family members serve in the military. They were chosen for the award this year not only because of their commitment to service in the military, but also for their public service through political office as well as philanthropy.

Members of the Firestone family with military service include: Brooks Firestone, his son Adam Firestone, and Adam’s son/Brooks’ grandson Nicholas Firestone. As well, Nicholas’ maternal Grandfather was Korean War hero Major Harry Colmery, Jr. Brooks joined the US Army in 1956 and received an honorable discharge in 1958. During that time, he served as a ward attendant at the hospital at Fort Ord and then as a corpsman in the emergency room. He was designated as a Medic, 911.30. In 2004, he was appointed to serve as Civilian Aide to the Secretary of the Army with a protocol rank of Lieutenant General. He retired from the position in 2006 to run for Santa Barbara County Supervisor. His awards include Expert Rifleman, Fort Ord Hospital “Soldier of the Month,” and Good Conduct medal.

Capt. Adam Firestone served in the United States Marine Corps from 1984 to 1991. He entered the fleet serving as Executive Officer of a support company for the 1st Marine Expeditionary Brigade. In 1990, he was assigned as Camp Commandant for the 1st Marine Division’s deception battalion.

Upon the launch of hostilities for Operation Desert Storm, his unit was responsible for conducting deception operations and raids against Iraqi positions along the Kuwaiti border. The unit then joined the full invasion into Kuwait, liberating the Kuwait City airport four days later. His personal awards include the Naval Achievement Medal with one star and the Combat Action Ribbon.

Capt. Nick Firestone was commissioned as a Second Lieutenant in the United States Marine Corps after graduating from the United States Naval Academy in May 2011. He served in Thailand, Mongolia and Afghanistan. Upon his return in November 2014, he served as the Battalion Administrative and Battalion Intelligence Officer for 2nd Battalion, 11th Marines up until the end of his active service in November 2015. His personal awards include a Navy and Marine Corps Medal with one star. He is currently a first-year graduate student at UC Berkeley Haas School of Business. 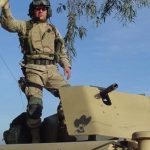