From my first glance at the school emblem during an online search for PhD programs in psychology, I knew I would apply to Pacifica. Until then, what had come up in that search failed to appeal to me. The strange, magic feeling that swept through me when the words For the Sake of Tending the Soul of the World appeared announced something important at hand.

Of course, I went carefully over the time to be spent there, costs, schedule, transportation, etc. But at a deep level, the decision had been made. As a boy, I had been obsessed with City Beneath the Sea, a TV movie set in a future oceanic research community. Whenever the movie aired, once every year or so, I always had to watch it. The name of the undersea city was Pacifica. As James Hillman points out in The Soul’s Code, how often possible future directions emerge first as childhood fantasies!

Many of us arrive on campus under a spell that casts a sparkle of enchantment over the school, the instructors, the other students, even the grounds and the buildings. Sitting in orientation on the very first day, the arc of professors seated in front reminded me of the first Round Table Knights ever glimpsed by young Percival. When sunlight reflected off their shields, he thought these riders were angels. He followed them all the way to Camelot, where King Arthur wisely put him into the kitchen for a few years of discipline. He had arrived where he needed to be.

Well-meaning friends and family often advise us to pursue a “practical” career. I have done that. I’ve worked steadily since turning 16. However, if you don’t also love your career, it can make you miserable. I have done that as well. I came to Pacifica to learn what kind of work would fulfill me.
In terms of practicality, how can you know what career suits you until you explore yourself? At Pacifica, where the lessons, conversations, and classroom interactions opened me up, I learned that teaching suited me better than working only with individuals. In addition to a sense of reenchantment, Pacifica had now given me a new career.

Some students enjoy a blissful life while attending school, some go on with their usual life, and a few, like me, start with a series of ruptures and losses. An abusive manager cost me my hated but lucrative job, and with it, my home, a relationship, several illusions, and even my car. Fortunately, studying at Pacifica was showing me how to look below and behind events for their guiding images and motifs. My relationship with myself, other people, humanity, nature, place, Earth, and Spirit was shifting rapidly, painfully, and beautifully away from the materialist-mechanical worldview of my culture and upbringing to a more spacious, participatory, and animate way of being here.

I was also keeping an eye on my dreams. One huge, startling dream gave me my doctoral topic and, springing forth from that, several books I would publish after graduation. Other dreams brought me out of my introverted self long enough to learn that I enjoyed experimenting with leadership styles. Offering public presentations had been unthinkable because of a crippling terror of speaking in front of groups; at Pacifica I learned to do it regularly, and even to enjoy it.

“No one grows alone,” Jung said. I remain in touch with friends made at Pacifica, some of whom supported me through my initial life difficulties. One of my professors helped me publish a paper before I had graduated. Pacifica’s name on my CV helped me land my first teaching job. Networking done as a student carried over into professional relationships afterward.

A hidden love of diverse outlooks and perspectives rose to the surface. Growing up in a rather homogenized and insular neighborhood had bored me. In that setting, different cultural backgrounds and belief systems were felt to be threatening and dangerous. Now they fed me. We gain so much by owning our privilege and attempting to turn it to good purpose, to service and fairness. Learning to delight in difference also freshened my appreciation for common ground shared by the entire human family.

My ideas about illness and health were also maturing. Before, like most Westerners, I had seen nothing wrong with taking a pill or wielding a technique in order to feel better. Now I was learning to ask of this symptom, that conflict, these rising emotions, those aches or rumblings: What do they mean? What are they saying metaphorically about our way of being in the world? What would result if we worked with instead of against the natural intelligence of the body-psyche?

During my enrollment my dad had asked me, reasonably enough, “What good will it do you to become a depth psychologist?” Professionally, it has done me plenty. When I enrolled at Pacifica I had no idea I would graduate to become an author, anthologist, consultant, professor, department chair, public speaker, editor, trainer of psychotherapists, applied mythologist, archetypal activist, founder of a journal, curriculum designer, certificate director, and educational administrator. Today I have more work of the fulfilling sort than I can get to.

Beyond that, graduate education at Pacifica has shown me a way to see through the turbulence of contemporary events, however tragic and troubling, to study the deep structural forces moving below the surface. “There is a law in this disaster,” one of Arthur Miller’s characters realizes in the play After the Fall. Seeing the law operate makes it possible to work with. Once the ground breaks open, creative possibilities emerge.
I am also highly resistant now to indoctrination by social institutions that survive by turning people into parts. Propaganda does not confuse me, demagogues do not intimidate me, and nothing scares me deeply anymore. I find myself aligned with contemporary efforts toward social and ecological justice.

At the start of my life I felt like an orphan who did not belong anywhere. Because of what I have learned, I feel, finally, at home, with my body, my psyche, my kindred, and the land of my birth, which is California. I am an appreciative fellow creature of Earth and a member of the cosmic community in which we are all embedded. And I am a citizen of a just, diverse, Earth-honoring world community that does not yet exist except here and there. But it will if we dream it forward and act bravely and soulfully to actualize those dreams.
I remain forever grateful that Pacifica has given me so much more than I could ever have expected. 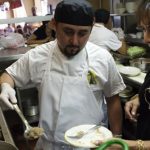 Owner Lupe Zuniga tastes some food in the kitchen for quality control at Lupe’s Mexican Restaurant in Thousand Oaks on Saturday.Alumni in Action