Book Title: Falling from the Moon

Falling From The Moon

In the midst of Redwood Summer in 1990, twenty-five year old visual artist, Sapphire Larson, sets out to resurrect the hippie father who vanished under a cloud of patchouli fifteen years earlier. Not only a peace activist, but a prophet and Hollywood actor, the mythological father of her childhood holds the key to her success as an adult – or so Sapphire believes.

Acting on a tip, she hitchhikes to the World Peace and Healing gathering. From tribal drumming at midnight, to women’s healing circles by day, Sapphire ignores the lessons the universe is trying to teach her while she struggles to reconstruct her childhood by finding her father.

She befriends a pregnant environmental activist from California’s lost coast, Lauren, whose own dreams of glory in the Redwood Forest are crumbling as her waistline is expanding. Vietnam Veteran Grizzly Bear Garth, haunted by the blood on his own hands, has tried to absolve himself by apprehending evil at the gathering. He befriends Sapphire and his stab at fathering her backfires when he reveals truths that destroy Sapphire’s dreams ‘of how things should be’ forever.

Lurking in the shadows is Mole, the troubled young man Sapphire befriends. Ignoring her own instincts that Mole’s troubles run deep, Sapphire fails to intervene before tragedy strikes.

Peopled with flamboyant characters and mystical settings, in an alternative culture that emphasis and opposes authority, Sapphire’s journey of discovery helps her find her place in this world.

Pacifica Program Graduate: PhD in Mythological Studies with an Emphasis in Depth Psychology

Karin Zirk has a doctorate in Mythological Studies with an Emphasis in Depth Psychology from Pacifica Graduate Institute where her dissertation focused on using mythic artifacts and journal writing to enhance well-being in family caregivers. While at Pacifica, she served as a peer reviewer and student editor for Mythological Studies Journal.

She has a bachelor of arts degree in Literature\Creative Writing from the University of California, San Diego and received a grant to fund work on her novel from the Elizabeth George Foundation for unpublished writers. Her poetry, short stories, and scholarly articles have been published in small offbeat journals.

Notes from the Road, a poetry chapbook about Karin’s years living in a Volkswagen camper van and traveling the United States, was published many years ago, in a galaxy far, far away. Her novel, Falling From The Moon, was published by Talk Story Publishing in early 2020 and is available in both print and eBook version.

She has worked in various Information Technology roles for over twenty years and currently specializes in database platforms. She is available for consulting work.

In her spare time, she blogs about creating safe and sane peace and healing gatherings.

Karin lives in a beach community in San Diego where she spends as much time as she can swimming in the ocean and riding her bike. She is the Executive Director of the Friends of Rose Creek, a community group focused on protecting and restoring her local creek. 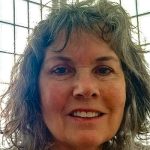 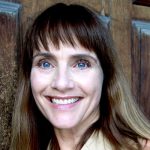